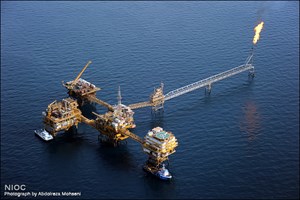 DUBAI (Bloomberg) — As Iran’s Islamic Republic enters a fifth decade, its energy industry has little to celebrate. The country’s crude output has yet to recover to pre-revolution levels and is unlikely to do so for many years, even without U.S. sanctions.

Oil production is languishing as foreign investors steer clear of the world’s fourth-largest holder of crude. Pledges by U.S. officials to tighten curbs on Iran’s oil sales and the expiration of waivers for several of the nation’s customers in early May are set to further restrict its exports.

Iran’s output slumped after the U.S. reinstated sanctions last year, accusing the country of sponsoring terrorism. Exemptions for importing countries including Japan, China, Turkey, India and South Korea have partially cushioned the blow. While some Iranian officials say they expect Washington to extend the waivers when they expire — possibly to help offset the decline in output of similar-quality crude from Venezuela — President Donald Trump’s administration insists it has no plans to do so.

Even if the U.S. lifted sanctions, Iran would be hard-pressed to pump near 6 MMbopd like it did just before the 1979 revolution. It produced less than half that amount — 2.74 MMbopd — in January, data compiled by Bloomberg show.

While it could quickly boost output to 4 MMbopd, a return to 6 million “is a much bigger endeavor and needs the confidence of international firms to come back,” said Richard Mallinson, an analyst with consultant Energy Aspects Ltd. in London.
Bypassing Sanctions

Turkey’s imports of Iranian crude have remained constant at about 150,000 bpd, and Japan and South Korea have continued to take regular shipments, said Ezzatollah Moslehi, the deputy director for international affairs at state-run National Iranian Oil Co. Iran exported an observed 1.28 MMbpd of crude and condensate last month, according to tanker-tracking data compiled by Bloomberg.

The country will continue selling some oil even if the U.S. refuses to extend waivers, said Amos Hochstein, a former State Department official who managed sanctions on Iran during Barack Obama’s administration.

“They will be able to be in that 800,000 to 1 million MMbpd margin on average. Some months will be lower than others,” said Hochstein, now a senior V.P. at Tellurian Inc., a U.S.-based liquefied natural gas company. Iran can slip some of its oil exports past the sanctions, and a few countries, which Hochstein didn’t specify, will purchase the crude with or without waivers because they “don’t care about exemptions,” he said.

Companies concerned about jeopardizing their access to U.S. dollars may be able to trade with Iran through a new payments arrangement known as Instex, a barter-based system that the U.K., France and Germany opened on Jan. 31. However, European companies are unlikely to use Instex because it might put at risk other transactions using dollars, said Reiner Jahn, an export finance broker and former vice president of the German-Iran Chamber of Commerce.

NIOC has discovered 65 oil and gas fields since the revolution, the company said, and their development might contribute to a recovery in output. Surviving under pressure has become a hallmark of the Islamic Republic, so much so that its leaders boast about the strength of their ‘Resistance Economy.’

Just a few years before clerics took control of Iran’s government and economy, the country was producing as much oil as Saudi Arabia. But the revolution, a war with Iraq and several rounds of U.S. sanctions have stymied growth.

Iran sits on an ocean of oil and gas reserves, yet it’s pumping the fuels at the second-slowest rate among the nine largest producers. The country can potentially maintain this pace for longer than Saudi Arabia and the U.S., but given long-term prospects for growth in alternative sources of energy, the world may not need it all.

While development of Iran’s oil reserves has been disappointing, gas production has been a bright spot. Iran raced to develop its gas reserves, the world’s second-largest, in a bid to keep pace with surging domestic demand. It has more than doubled gas output since 2006.

With the local market now close to saturation, Iran would need more export routes to extend its production growth. Iran ships limited amounts of gas to neighbors by pipeline, most recently adding Iraq to its list of buyers, but plans to pipe gas to Pakistan, Afghanistan, Oman and the United Arab Emirates have all hit hurdles.

Iran would also like to export liquefied gas, and it tried to drum up interest from international companies to finish its half-built LNG plant after previous sanctions ended in 2016. Iran LNG is still in talks with potential investors, but the latest U.S. curbs have caused difficulties, said a company official who asked to not to be identified because he isn’t authorized to speak to news media.

Companies with the necessary liquefaction technology hesitated to work with Iran even without sanctions, Hochstein said. “I see almost zero chance that they will do that during sanctions.”