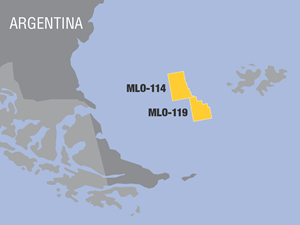 Photo: Wintershall licenses in the Malvinas Basin of the coast of Tierra del Fuego.

BUENOS AIRES and KASSEL — Wintershall won the bidding process for two blocks in the promising Malvinas Basin off the coast of Tierra del Fuego as part of the “Costa Afuera” licensing round. In addition to the CMA-1 exploitation concession, with this award, the company will participate in further offshore exploration projects in Argentina. The exploration licenses are located approximately 186.4 mi (300 km) off the southeast coast of Argentina. Wintershall will hold a 27% interest in the licenses MLO-114 and MLO-119. The British-Irish company Tullow is the operator, while the Argentine company Pluspetrol is another partner. The official license award by the authorities is expected in May.

“Argentina is an important core and growth region for us. We have been active in the country for 40 years and have been producing hydrocarbons off the coast of Tierra del Fuego for 30 years. The investment in Block MLO-114 and MLO-119 provides a great opportunity to further expand our portfolio in Argentina. Argentina has promising resources, both offshore and onshore. We’re convinced that we can make excellent use of our many years of experience in the country for future exploration activities,” says Thilo Wieland, Wintershall’s executive board member responsible for South America, Russia and North Africa.

Considerable potential off the coast

License MLO-114 and MLO-119 are located about 186.4 mi (300 km) off the coast of Tierra del Fuego at depths of up to 1,640.42 ft (500 m). “Numerous discoveries have been made around the southern Atlantic in various countries in recent years. The awarded blocks represent a great opportunity for the company to continue our consolidation as an important player in the region,” Thilo Wieland continues. The two 6,000 and 4,500 km² blocks will be covered with modern 3D seismic surveys during the initial exploration period.

Active in the country for over four decades

Wintershall has been an integral part of the Argentine energy industry for over 40 years and is the country’s fourth-largest gas producer. In addition to blocks off the coast of Tierra del Fuego, the company produces hydrocarbons in the provinces of Neuquén and Mendoza. Wintershall is the operator of three blocks: Aguada Federal and Bandurria Norte in Neuquén and CN-V in Mendoza province. The wholly owned subsidiary Wintershall Energía S.A produces some 26 MMboe annually.