TEHRAN (Bloomberg) – Iran expects an oil tanker seized by the UK in the Strait of Gibraltar in July will be released soon, the semi-official Fars News agency reported Tuesday, a move that could help to ease concerns about the safety of shipping routes in the Middle East. 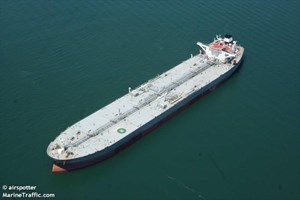 “Official and unofficial documents have been exchanged to resolve the matter and we hope the problem will be dealt with in the very near future,” Fars cited Jalil Eslami, deputy for maritime affairs at Iran’s Ports and Maritime Organization, as saying. The future of a UK-flagged tanker that Iran seized later in the Persian Gulf depends on “the necessary judicial processes,” Eslami added.

Iran’s Grace 1 tanker was seized by the Royal Navy on suspicion it was sending crude oil to Syria in violation of European Union sanctions. Tehran denied breaking sanctions and two weeks later impounded the UK-flagged Stena Impero near the Strait of Hormuz, the world’s most important chokepoint for oil.

The tanker seizures and other suspected Iranian operations against shipping in the Persian Gulf region have inflamed a crisis between Iran and the West triggered by the Trump administration’s decision to quit the multiparty nuclear deal with Iran a year ago and renew crippling economic sanctions. Iran has responded by abandoning some restrictions on uranium enrichment imposed by the 2015 accord.

The frictions on the seas have led the U.S. and UK to mount a joint mission to protect commercial shipping lanes in the Middle East. Reports of Israeli involvement in that mission have drawn fire from Tehran, and on Tuesday, the commander of Iran’s Revolutionary Guards Corp’s naval forces warned against “any illegal presence in the Persian Gulf and Strait of Hormuz, especially Israel’s.”

“We in the Iranian Revolutionary Guards Corps are in charge of providing security for the Strait of Hormuz and the Persian Gulf, and there is no need for strangers,” Rear Admiral Alireza Tangsiri said, according to the semi-official Iranian Students’ News Agency.

Israel considers Iran to be its most formidable enemy, due to its nuclear work, ballistic missile program and support for anti-Israel militant groups in the Middle East. Iranian officials have also referred multiple times to Israel’s annihilation. Prime Minister Benjamin Netanyahu lobbied hard against the nuclear deal, and pressed President Donald Trump to abandon it.

Israel has been striking Iranian targets in Syria over the past few years in an effort to limit the Islamic Republic’s presence in its immediate neighborhood, and according to recent reports, has expanded those operations to hit Iranian-backed militias in Iraq.

Guyana may not be ready for its pending oil riches, but ExxonMobil is
OPEX secures CNOOC North Sea predictive analytics contract