LONDON (Bloomberg) – Middle East geopolitics have come back with a vengeance to hit the oil market. What everybody feared has happened. An attack has penetrated the defenses of Saudi Arabia’s massive Abqaiq oil processing facility, the heart of the kingdom’s oil production and export infrastructure, causing an unknown amount of damage. Crude prices will react and emergency stockpiles will be tapped. 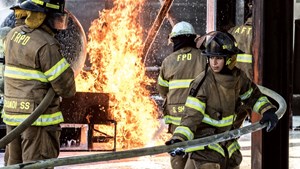 Fires at the plant were brought under control within hours, but the flow of crude from Saudi Arabia, the world’s biggest exporter, will almost certainly be affected, although we don’t yet know by how much or for how long. Traders who have shrugged off tensions in the Middle East for months will respond to this attack when markets open on Monday.

The height of the price spike will depend on how much we know about the extent of the damage and how long it will take to repair. An absence of information will lead traders to assume the worst.

The Abqaiq crude processing plant is the single most important facility in the Saudi oil sector. In 2018 it processed about half of the kingdom’s crude oil production, according to a prospectus published in May for the state oil company’s first international bond. That’s roughly 5 MMbpd, or one in every 20 barrels of oil used worldwide.

Abqaiq is more important to the Saudi oil sector than the kingdom’s Persian Gulf export terminals at Ras Tanura and Ju’aymah, or the Strait of Hormuz that links the Gulf to the Indian Ocean and the high seas. Crude can be diverted away from the Persian Gulf and Hormuz by pumping it across the country to the Red Sea through the East-West oil pipeline. But it cannot bypass Abqaiq. The East-West pipeline starts at Abqaiq and output from the giant Ghawar, Shaybah and Khurais fields is all processed there, so an attack on the facility will impact crude flows to export terminals on both coasts.

The latest attack comes just months after drones, allegedly launched from Iraq by Yemen’s Houthi rebels, targeted pumping stations on the oil pipeline. The damage caused by that earlier attack was minimal, but highlighted the vulnerability of Saudi Arabia’s oil infrastructure, even when located hundreds of miles from the country’s borders.

So what happens now?

Saudi Arabia will probably seek to maintain export levels as much as possible by supplying customers from stockpiles. It holds crude in storage tanks in the kingdom, as well as at sites in Egypt, Japan and the Netherlands. But it has been running its crude hoard down since the beginning of 2016 and it is now back at levels not seen since 2008, according to data from the Joint Organisations Data Initiative. That means the kingdom has much less to draw on than it did three years ago.

The attack will also test stockpiles in oil-consuming countries. Members of the International Energy Agency are required to hold 90 days’ worth of oil imports in emergency stocks and those will be pressed into service if the outage at Abqaiq is prolonged. Non-member countries like China and India have also been building up their own emergency reserves. Those, too, will be pressed into service.

Neighboring countries who, just days ago, were being exhorted to stick to output quotas agreed in December will now pump as much as they can to make up for any losses from Saudi Arabia. The United Arab Emirates, Kuwait and Iraq will all boost output as much as they are able. But the one country with lots of spare capacity, Iran, won’t see any easing of the restrictions placed on its oil sales by the U.S. Quite the opposite. Its support for the Houthi rebels in Yemen, who have claimed responsibility for the attack on Abqaiq, will ensure that any easing of the pressure being exerted on it remains a distant prospect.