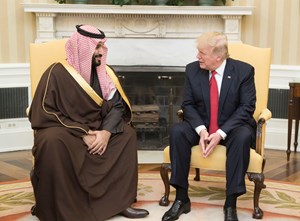 Trump affirmed the U.S. stance with Saudi Arabia and support for the kingdom’s stability, SPA reported. Trump also stressed the negative impact of the attacks on U.S. and global economy, according to SPA.

Iranian-backed Houthi rebels in Yemen claimed responsibility for the strikes, which forced Saudi Aramco to cut daily oil production in half.

The White House had no immediate comment on a call between Trump and the Crown Prince. The president spent much of Saturday at his Virginia golf club.

“It is now time for the U.S. to put on the table an attack on Iranian oil refineries if they continue their provocations or increase nuclear enrichment,” Graham of South Carolina said on Twitter. “Iran will not stop their misbehavior until the consequences become more real, like attacking their refineries.”

John Abizaid, the U.S. ambassador to Saudi Arabia, said in a tweet that the U.S. “strongly condemns” the drone attacks.

“These attacks against critical infrastructure endanger civilians, are unacceptable, and sooner or later will result in innocent lives being lost,” Abizaid said.